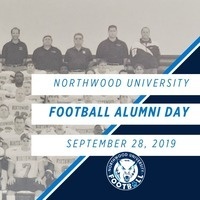 "Celebrating the Legacy of Northwood Football" and Recognizing the 20th Anniversary of the 1999 GLIAC Championship Team.

New this year! The tavern will be inside the football stadium on the east end and will feature a cash bar. Must be 21 to enter and be able to provide proper photo ID.

**Free admission to the game for all alumni football players. Your ticket may be redeemed at the tailgating tent.**

You're not going yet!

Register
This event content is powered by the Localist Community Event Platform.