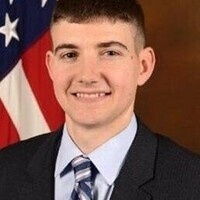 Larkin O’Hern was born in Tacoma, WA and grew up in a military family before graduating from Belton High School in Belton, TX in 2004.  He commissioned from the United States Military Academy at West Point in 2008. After completing the Infantry Office Basic Course, Airborne School and Ranger School at Ft. Benning, GA he was assigned to the 101st Airborne Division at Ft. Campbell, KY Air Assault, Airborne, where he served as a rifle platoon leader. He deployed to Kandahar, Afghanistan in June of 2010, and after seven months in Afghanistan, was severely wounded on December 30, suffering the loss of both legs and a hand. He was medevac’d to Brooke Army Medical Center on Ft Sam Houston, TX where he spent six weeks inpatient before getting discharged and beginning his rehabilitation.  In the course of his two and half year recovery Larkin completed the Defense Strategy Course and worked as a Future Operations Planner at US Army North in preparation to continue on active duty.
In the spring of 2013 Larkin was approved by the Army to continue on active duty and selected to serve as an Army Congressional Fellow in Washington, DC.  He earned a Master’s Degree in Legislative Affairs from George Washington University and served as the Defense Legislative Fellow for U.S. Senator Patty Murray before being assigned to the Office of Chief Legislative Liaison as a Legislative Liaison.