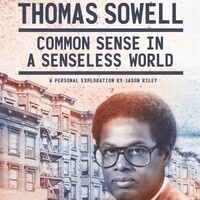 Prior to Mr. Riley's presentation, we will be screening his new documentary,  Thomas Sowell: Common Sense in a Senseless World.  This documentary explores the life and work of one of our era’s greatest authors on race, history and economics. Sowell’s intellectual honesty and quest for facts took him from Harlem to  Harvard, Columbia University and finally the University of Chicago for his Ph.D. in economics. He has earned positions at top universities as a professor of economics, was a popular syndicated columnist for 30 years, and has written and published 37 books – so far – on a variety of subjects. The one-hour program features insights from Sowell, interviews with colleagues, associates and with those he has inspired, revealing why the intensely private Thomas Sowell is considered by many to be “one of the greatest minds of the past half-century” and “the smartest person in the room.”