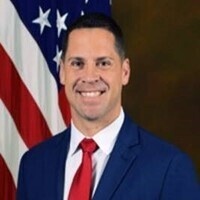 CPT Kastl is a native of Midland, MI. Cory graduated from the United States Military Academy with a degree in Business Management with a concentration in Systems Engineering and was commissioned as a Second Lieutenant in the Infantry in 2008.
After completion of the Infantry Officer Basic Course, CPT Kastl was assigned to the 2nd BCT of the 101st Airborne Division at Fort Campbell, KY. During his time in the 101st, CPT Kastl served as a Platoon Leader and Company Executive Officer and deployed to Afghanistan in 2010 in support of Operation Enduring Freedom.

In 2012, CPT Kastl graduated from the Maneuver Captain’s Career Course and was assigned to 3rd SBCT, 7th Infantry Division. While at Joint Base Lewis-McChord, CPT Kastl served as a Battalion Assistant Operations Officer, and Commander of A/2-3 IN. He also served as the Commander of HHC/2-3 IN and participated in Pacific Pathways 16-01. In 2017, CPT Kastl was selected for the Army Congressional Fellowship where he served as the Defense Fellow for Representative Paul Cook from California. He currently serves as a Legislative Liaison for Army Personnel.
Cory’s military education includes the Basic Officer Leader Course II, Infantry Basic Officer Leadership course, Maneuver Captain’s Career Course, and Combatives Level 2. In addition, Cory has a Masters in Legislative Affairs from George Washington University.
CPT Kastl’s awards include the Bronze Star Medal, the Purple Heart, the Meritorious Service Medal, the Army Commendation Medal with 1 oak leaf cluster and valor device, the Army Achievement Medal with 3 oak leaf clusters, the Presidential Unit Citation, and the Valorous Unit Award. Cory is authorized to wear the Combat Infantryman Badge, Expert Infantryman Badge, Ranger Tab, Air Assault Badge, Parachutist Badge, and the German Proficiency Badge (Gold).